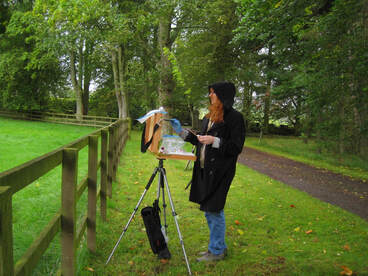 A childhood of moving and traveling around the United States has shaped Katherine Kean’s vision, as have journeys to eastern Africa, Mexico, Scotland, France and painting jaunts all over Kean’s now native California. Born in West Virginia, moving later to Ohio and New Jersey, but growing up mainly in Massachusetts, she attended Rhode Island School of Design, graduating with a BFA in Film, Video and Animation. Throughout her career as a visual effects artist working on films such as Willow and Ghost, Kean often hosted art exhibitions in her company’s studio space. In 2003, the role of part-time gallerist gave way to full-time painting. She has since achieved a reputation for skillfully using observation, memory, and interpretation to translate her love of nature’s kinetic phenomena into paintings that capture the often turbulent emotions within light, weather, and landscapes.

​Her work has exhibited in museums and galleries across the United States, including the LACMA Art Rental and Sales Gallery, the Brand Library Art Gallery, and the Annenberg Community Beach House in Los Angeles, and has been acquired by many private and corporate collections. She has been honored to have her work selected for Bloomingdales in Santa Monica, California, Schiffer’s 100 Artists of the West Coast II, Paint America’s Paint the Parks, Manhattan Arts Healing Arts International’s Celebrate the Healing Power of Art and the National Weather Center 2015 Biennale.